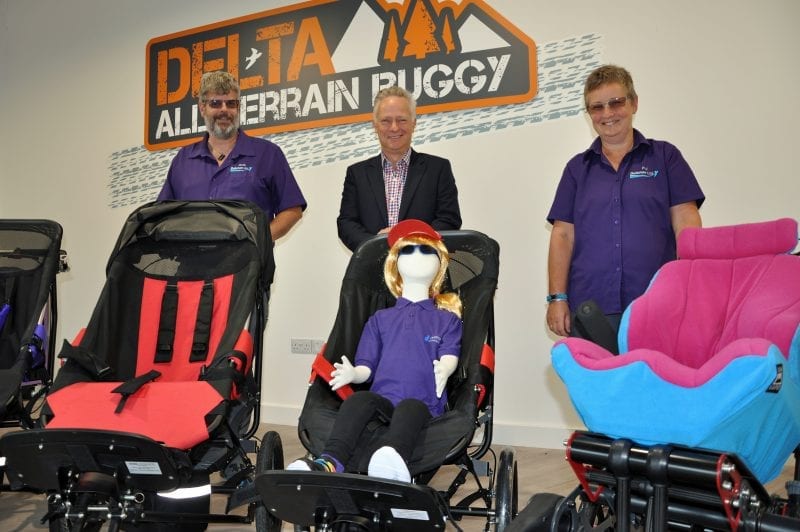 Visit the impressive new state-of-the-art headquarters of Delichon on the edge of the New Forest and one thing jumps out immediately. Virtually everything is purple, from the company logo, filing cabinets and staff polo shirts to the workbenches, bins and even forklift.

“When it came to the design of the building we were asked if we had any preferences for the colour of the internal steel girders.

“Everyone goes for the standard colours, especially blue, but we thought we’d be different by choosing purple.

“We’ve now rolled it out across the company and it is really noticed. It’s just a small example of how we try to be different, and distinctive as a business.”

Founded 22 years ago, Delichon is one of the UK’s top providers of custom seating, all-terrain buggies (ATBs) and beach wheelchairs for children and adults with special needs.

In addition to its unique Foam-Karve process for the production of special seating, the company also manufactures its own 3-wheel Delta ATB which is suitable for children and adults.

Delichon, which employs 15 people, is also the UK distributor for the amphibious Hippocampe beach wheelchair.

To say the family business has changed lives is something of an understatement.

“We literally receive tweets and emails everyday telling us, that thanks to our products, customers who may have been confined to their homes for years have been able to enjoy something as simple as a family walk.

“I can’t tell you how good it is to know what a positive difference our company is making to so many lives.

“It’s something of a cliché but as a small company we really do care about our customers and our products. That willingness to go the extra mile is not just noticed but appreciated.”

Martin first invented the Foam-Karve machine, and its method of making custom seating for wheelchairs, in 1991 while working in the engineering department at Salisbury District Hospital.

“The idea literally came to me in the middle of night. I knew immediately I had hit upon something big,” said Martin.

While P-J continued to work in the hospital’s spinal unit, Martin left his secure job with the National Health Service to develop Foam-Karve.

“It was a huge gamble but sometimes you just have to trust your instincts. That’s what being an entrepreneur is all about. Are you prepared to take the risk and in my case the answer was most definitely ‘yes’,” he added.

Foam-Karve has gone on to be copied worldwide while the Foam-Karve identity has been adopted as a generic name for many types of custom contoured foam seating as well as the company’s trademark.

In 1996 Delichon was founded, originally as a special seating company.

“We became aware that although our seating on a wheelchair provided a functional and comfortable base for everyday school and home use, our customers were, in the main, unable to get about and easily in the countryside and to more remote locations.”

Further innovation followed with Delichon becoming one of the first companies to use three wheeled ATB’s to get disabled children and adults out and about in the open.

From offering a standard baby buggy, the company expanded its range to include other buggies, adapted as necessary, before launching its own ATB, the Delta, in 2007.

Designed and developed by Delichon and manufactured in the UK, the range was expanded six years later to include an XL model for clients up to 195cm tall and a cycle trailer conversion kit for small, medium and large Deltas.

“The company has seen tremendous growth and we now export all over the world, from Norway and Germany to Australia and New Zealand.”

In early 2018 Delichon finally said goodbye to the collection of former agricultural buildings which had been its home for the last 22 years and moved five miles up the road. Its striking new headquarters covers 1,300 square metres and represents a £1.75 million investment. It includes fully accessible demonstration and clinic facilities as well as countryside trails for customers to try out its products.

“It’s fair to say that visitors to our new HQ are amazed by what they find. I won’t pretend that the whole process, from start to finish, hasn’t been a huge challenge but we’re delighted with the final result,” said Martin.

“There is no blueprint – or should that be purple print – for a family business but I never fail to be impressed at what Martin and P-J have achieved with Delichon.

“Not only have they built a highly successful business but they have literally transformed thousands of people’s lives over the years with their innovative products. It’s a genuine pleasure and privilege to count Delichon as a client.”

“We really like the fact that we’re looked after by someone who has made family businesses his speciality. Paul has made the effort to get to know us and understand the particular dynamics that make Delichon tick.

“One of the best things about being a client of PKF Francis Clark is feeling like we are dealing with a small firm of accountants in Salisbury and yet the wider Francis Clark family sits in the background as a resource when we need specialist advice.

“The firm brings so much to the table, from assisting on every type of accountancy issue to providing opportunities to network with other family businesses. We’re very pleased with the service received from Paul and his team.”

Podcast: Fourth-generation baker Steve Oxford on what family business means to him

In the latest episode of our Business Noodles & Doodles podcast, Mark Greaves talks to Steve Oxford, managing director and fourth-generation baker at Oxford’s Bakery, an…

Welcome to our GP Finance Newsletter. This edition covers a number of issues that impact on General Practice, including: National insurance rises Pension contributions Your FAQs…

Director Kieran Hancock from our Healthcare team has been featured in GP Business Magazine, having written a helpful article advising practice managers on how increasing costs…