Dike & Son Limited - Fax the way we like to order in our groceries! - PKF Francis Clark skip to Main Content
Menu

A family-owned grocers in the South has seen a boom in orders thanks to a blend of old-fashioned personal service and online technology. 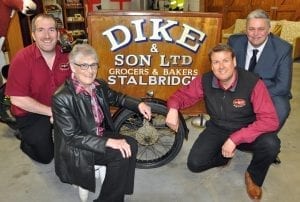 Fifth-generation Dike & Son has bucked the retail trend by not having to furlough or lay off any of its 75 staff during the Covid-19 lockdown.

The Dorset firm was established in 1851 when Queen Victoria was on the throne and workhouses for the penniless had just opened.

Since then the business, in Ring Street, Stalbridge, west of Shaftesbury, has traded through some of the biggest upheavals in modern British history.

Life-changing events include two world wars, a series of recessions and, now, the national emergency.

Andy Dike, who leads the firm that bears his family name, said: “Like many enterprises, we’ve had to adapt in double-quick time to these extraordinary circumstances.

“My team have been absolutely superb and I’m incredibly proud of the way they have pulled together.

“On the technology side of things, our website is receiving record traffic, with online shopping orders for home delivery in our vans and the increasingly popular click-and-collect option.

“For the first four months of 2020 we have beaten the yearly totals for every year since we started internet shopping back in May 2015.

“Whilst the internet has been incredibly convenient for many customers, who can choose from 10,000 products listed on our internet shop, some of our older customers prefer the personal touch.

“They ring in their delivery order by phone, get people to drop their shopping lists into us or send over what they want via an old-fashioned fax!

“We’re also seeing a surge in orders for pre-selected grocery boxes, full of staples and fresh food and milk, because some customers simply don’t want to make decisions on food and drink items.”

Two delivery drivers over 70 had to stand down, for virus shielding reasons, with people from the town stepping in.

Andy said: “It is clear to many of us that customers, particular the middle aged and older, are appreciative of the rigorous public health measures we implemented very early on – it gives them peace of mind.”

Six staff are on door rota at the grocery store, with a one-in, one-out policy and hygiene gel stations. Trolley and wire basket handles are wiped down before each use.

“At the entrance, while customers wait, you get to a chance to talk for the first time and we’ve met so many wonderful people in all of this. It feels like the 1950s,” Andy said.

In line with government guidelines, Dike’s shut its cafe; staff were given work at the grocery store instead. Subsequently the cafe has become a fish and chip takeaway two afternoons a week.

Even the deli display fridge has been modified, with the curved glass screen removed. Cold meats, pies and other savouries are portioned and wrapped so customers can help themselves safely.

Meanwhile, rather than being mothballed, the cafe’s espresso coffee machine is used every day by staff.

With flour in short supply, Dike’s sourced a local supplier –  an ancient Domesday Book flour mill on the River Stour.

Sturminster Newton Mill is a working tourist attraction which has temporarily converted to commercial production due to home-baking demand.

The tie-up caught the imagination of The One Show, the BBC’s live magazine TV show featuring topical stories and big-name studio guests, with location filming and interviews.

Andy said: “I’m so proud of the team. Yes, there were tears to start off with, because of all the challenges which come with virus transmission prevention, but we’re still smiling despite everything. It’s that wartime spirit – keep calm and carry on.”

James Robinson, a partner at Poole-based PFK Francis Clark, said: “Family businesses are at the heart of our economy and communities – Dike & Son stands testament to that.

“According to industry figures, 88% of all businesses in the UK are family owned – a staggering 4.8 million in total.

“Their contribution to the economy should never be underestimated, given that family firms pay £149 billion in tax each year, which is around 21% of government revenues.

“Andy and his staff have risen to the operational challenges presented on a daily basis by the national emergency – they’ve swiftly adapted, changing working practices to seamlessly meet the online and traditional needs of customers in the digital and physical world.”

Ahead of English Wine Week, we spoke to Mike Boyne, owner of the award-winning BinTwo wine bar and merchants business in Padstow, who gave us an…