You would be hard pressed these days to have not heard of Dogecoin (DOGE), but what is it, why has it become so popular and what is all the fuss about?

DOGE is a cryptocurrency formed back in 2013 by two software engineers who worked for IBM and Adobe. Unlike Ethereum (ETH) or Solana (SOL) DOGE has no utility outside of a peer-to-peer payment system. Unlike Bitcoin which has a limited supply, Dogecoin’s supply is unlimited.

DOGE is what is known in the world of cryptocurrency as a memecoin. The symbol for DOGE is the infamous dog Shiba Inu made famous by a number of internet memes, but this joke coin has seen its popularity and value soar as more and more people have bought in.

At the time of writing DOGE has a market capital of $40bn (an increase of over $5bn in the last week) and is the 10th leading cryptocurrency by market cap. Not bad for a coin that started out as a joke, right? To put into context, its market capital has surpassed that of multinational companies HP ($35.3bn) or Porsche ($35.03bn).

Why is it so popular?

In 2021 DOGE sky-rocketed a massive 15,000 per cent, creating a number of crypto-millionaires in a very short space of time. Many were not so lucky.

Sparked by a tweet from Tesla CEO Elon Musk expressing his interest in the coin, DOGE was suddenly on the radar to the masses. As the price surged so did the interest until DOGE had spiked to 0.68c per coin. Then came the inevitable slicing and selling as many took their profits, but the coin now sits at around 0.30c and holds its own against other utility based tokens.

Where does it go from here?

If only for that crystal ball.

Last Sunday (24 October), when asked about his cryptocurrency portfolio, Elon Musk reaffirmed his interest in the coin tweeting “Out of curiosity. I acquired some ascii hash strings called bitcoin, Ethereum and doge, That’s it”. And that was enough. With the might of his social medial presence the chosen coins reacted favourably as people started buying what Elon owns once more.

It is expected that you will be able to pay for a SpaceX trip using DOGE and literally go to the moon. Whilst at the time of this announcement, it seemed ludicrous to pay for anything in DOGE, more and more retailers have been opening their doors to accept this cryptocurrency.

As we have seen in general across the market, DOGE will continue to be volatile and whether it stands for a liberal statement against democracy, or for personal enjoyment, DOGE remains a contender to many.

During the drafting of this blog, DOGE was the 8th largest cryptocurrency by market cap before it slid down to 10th, and has now been beaten by another meme coin, created in 2020 in DOGE’s honour, – the Shiba Inu Token. But that… is a blog of its very own….

by David Manning, Manager and member of the Crypto team 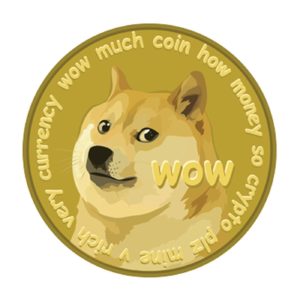 Welcome to our July edition of all things blockchain. This month, we overboard on NFTs, ponder on how safe our crypto is and get overly excited…

Welcome to our first monthly round up of all things blockchain. Here, over the coming months, we will digest some of the biggest news that has…