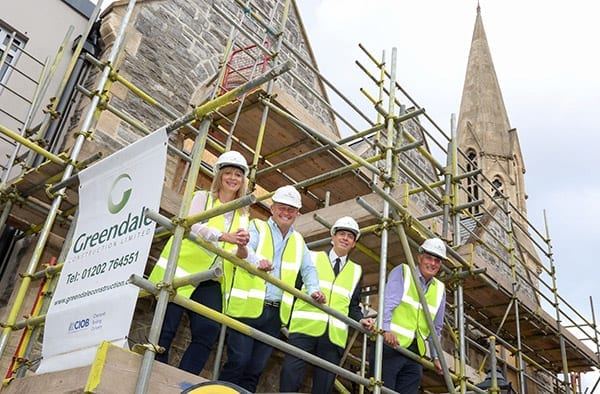 It started in the midst of a recession and has grown to become one of the biggest – and most respected – building companies in the South.

Add in a list of successful projects – from castles to car showrooms and piers to a priory – and you can see why Greendale Construction has built such an impressive reputation.

For Director Chris Kane, who started the company with fellow Director Rob Hooker in a spare room 28 years ago, the values instilled in the business from day one still hold true today.

“From the smallest project to the biggest, we use the best people and the best materials delivering a quality job at a fair price,” said Chris.

“This is a very tough sector, and we’ve seen a lot of competitors fall by the wayside over the years.

“The fact that we’re not just still here but profitable and expanding shows that we must be doing things right.

“Greendale Construction may be built on firm foundations but we’re never complacent and we never relax. We’re always looking to the future.”

It is also able to rely on the skills of sub-contractors and suppliers who have worked for the company for many years and are familiar with Greendale’s exacting standards.

From its humble beginnings in 1990 – when Rob and Chris even operated a short-lived jet wash service to boost company coffers – Greendale now delivers building services across a range of sectors.

Current projects include Highcliffe Castle in Dorset where Greendale has started work on the seventh phase of an 18-month building project.

It will see the Grade I listed building’s Penleaze Wing fully restored, the castle’s historic kitchen reinstalled as well as the creation of new exhibition and activity spaces.

The project saw the 190-year-old building restored and turned into a new visitor centre and cafe.

A short distance from Swanage Pier is Durlston Castle which was built between 1897 and 1891. Greendale won the commercial category of the Master Builder of the Year 2012 awards for its work on the Grade II listed building.

The 74-week part Heritage Lottery Funded project involved the complete restoration of the castle, a new shop and gallery extension, and the construction of a time line path from main car park to castle entrance.

“Such projects really are a labour of love and we’re incredibly proud to be entrusted with contracts involving such historic sites,” said Chris.

Other prestige work has ranged from the £1.3 million design and build of Parkstone Golf Club, in Dorset, which was carried out over five phases, to the £4.4 million renovation, extension and alteration of the Hotel De Vin building in Poole.

But Greendale, which has an annual turnover of more than £10 million, is not just about big projects. One-off small works can range in value from £1,000 upwards.

“We’re very careful about who we work with and for. It’s served us well as has the policy of spreading our projects among different sectors, avoiding becoming over reliant on one.”

Maria Seabright, Finance & HR Director, who joined Greendale in 1997, said the firm passionately believed in building for the future by investing in its “fantastic team.”

“Many have been with us a long time and it’s a source of real pride that they include staff who joined as apprentices or A-level students and are now site managers and surveyors,” said Maria.

“We have a thriving apprenticeship scheme and also a Graduate Training Programme. We’re one of very few construction companies to actually fund three year degrees. It’s a big investment but we believe in helping our staff build for their own futures through their careers,” said Maria.

Greendale became a PKF Francis Clark client in 2001 and since then, said Maria, the firm has never looked back.

“Greendale receive an excellent service through our Partner Martin Aldridge, Director Michelle Love and their team. We have a very good day-to-day relationship and particularly value the ‘one stop shop’ element which means that whatever the issue, PKF Francis Clark have the experts and knowledge to deal with it,” said Maria.

“Greendale Construction is a high quality company with exacting standards which are reflected in everything they do.

“The company has a strong Board and a very impressive, and well-deserved, reputation. We’re proud to count the firm as a client.”

FEATURING: Martin Aldridge
Martin is based in the Poole office. He trained with Grant Thornton before joining a predecessor firm of PKF Francis Clark, becoming a partner in… read more

Making Tax Digital for Income Tax – how it will impact landlords

From April 2024, all landlords with income over £10,000 per year will be required to comply with Making Tax Digital (MTD). This will be extended to…

Leo and Taurus Developments – the journey so far

We sat down with Sam O'Connell and Carla Bennett, together the brains and the muscle behind female-led property developers Leo and Taurus Developments, based in Plymouth.…