As INEOS TEAM UK embark on the latest stage of their quest to become the first British crew to win the America’s Cup, we’re supporting them every step of the way.

Should Sir Ben and his team succeed in lifting the historic trophy, no one will be more delighted than Martin Aldridge, who has helped the record-breaking Olympian to manage his finances throughout his distinguished sailing career.

Martin, a former windsurfing world champion, first got to know Ben, then a teenage sailing prodigy, through their shared passion for competing on the water. Now nearly 30 years later, he is hoping to see him beat the holders, Emirates Team New Zealand, to win the America’s Cup, which is due to get under way in Auckland on Saturday, March 6.

But to reach the final INEOS TEAM UK first need to see off the Italian crew Luna Rossa Prada Pirelli in the Prada Cup final, a best-of-13 series of races which started on Saturday, February 13.

“We get a thrill from seeing all our clients achieve their ambitions, in business or sport,” said Martin, a partner at our Poole office. “In the case of INEOS TEAM UK, we’re incredibly excited that they are in with a good chance of making sporting history.

“They have worked incredibly hard in pursuit of marginal gains to get to this stage, and it would be amazing to see Sir Ben and his team bring the America’s Cup home. It’s the pinnacle of sailing. We’ll be watching their progress closely and cheering them on from back at home.”

PKF Francis Clark have provided financial support services across a range of areas to the INEOS TEAM UK race team since their inception… If they cannot answer a question, they always have the resources in the team to find out the answer and give a speedy response

The team’s AC75-class boat, Britannia, is an impressive feat of engineering, developed over the past three years in a relentless quest for speed.

R&D tax specialist Lisa Whitbread said: “I’ve visited the team in Portsmouth several times over the past few years and am always amazed by the engineering expertise and innovation that has gone into developing the boat they are now racing. It’s like designing a Formula One car.

“My role is to help identify what parts of this work qualify for R&D tax credits, and we have successfully submitted some valuable R&D claims which have assisted with the financing of the British campaign. Financially, this has made a huge difference to the team’s ability to compete over the years.

“It’s really exciting to be part of this effort and we’ll be ecstatic if INEOS TEAM UK can win the America’s Cup.” 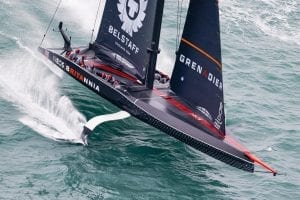 With the team spending much of the past year in Italy and New Zealand for training camps and races, there are also international tax issues to navigate.

“We’ve been heavily involved in assisting and advising on the tax implications of the team being out in New Zealand and dealing with the tax authorities there, as we did when they set up a training base in Italy,” said Martin. “Our membership of the PKF international network means we can draw on the support of local colleagues around the world when needed.”

Matt Robinson, CFO of INEOS TEAM UK, said: “PKF Francis Clark have provided financial support services across a range of areas to the INEOS TEAM UK race team since their inception. For an impatient CFO, working in a fast-paced sports team, speed is of the essence and the team are almost always on the end of the line and can answer most things straight off the bat. If they cannot answer a question, they always have the resources in the team to find out the answer and give a speedy response and will work through issues with you to provide guidance if the answer is not straightforward.”

To find out more about our professional sports team, click here.

FEATURING: Martin Aldridge
Martin is based in the Poole office. He trained with Grant Thornton before joining a predecessor firm of PKF Francis Clark, becoming a partner in… read more
FEATURING: Lisa Whitbread
Lisa leads the corporate tax team in our Poole office and specialises in all aspects of corporate and business taxes. She enjoys focusing on research… read more

What are the real advantages of a non-UK domicile status in the UK?

Is your business ready for Plastic Packaging Tax?

Plastic Packaging Tax (PPT) will launch on 1 April 2022 with the aim to encourage usage of recycled packaging. Any entity that interacts with plastic packaging…