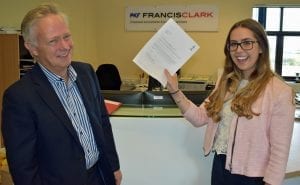 When PKF Francis Clark Accounts Assistant Kalina Forbes took the latest of her professional qualification exams little did she know she would soon be named best in the world. But that is exactly what happened to Kalina, 25, who is on the firm’s graduate accounting programme, based in the Salisbury office.

It was a highly appropriate score given that in 2019 chartered accountants and business advisers PKF Francis Clark celebrates its 100th anniversary.

Kalina has been awarded the Little Prize by the governing body ICAEW (Institute of Chartered Accountants in England and Wales) and will attend a glittering awards ceremony in London next April.

Kalina, born and bred in Bradford on Avon and now living in Salisbury, said: “I have put a lot of effort into studying, but I certainly didn’t expect to get 100 per cent and achieve the top mark worldwide.

“I am so pleased with the result, but this is just one step along the way to becoming professionally qualified as a chartered accountant. I still have three advanced papers to do in my final year of training.”

Kalina, who has an A level in Polish, was educated at St Augustine’s Catholic College in Trowbridge before achieving a First Class Degree in Psychology at Cardiff University, and hopes to eventually specialise in an area for the firm, but has not yet decided which area.

She has always had a strong work ethic – holding down a job with an accounting practice while at university and working as a data analyst during the holidays. She also spent a year in the finance department at Wiltshire Council.

And her exam success is not the first time she has hit the heights – in her spare time she is a serious hiker and counts climbing the 19,308 ft Mount Kilimanjaro in Tanzania and walking at ancient Machu Picchu, the Incan citadel 7,970 feet up in the Andes in Peru among her travel highlights.

Paul Giessler, Partner, said: “Kalina’s hard work in her multi-faceted role within the company and her dedication to passing her professional qualification exams made me think she would do well – but to be named best in the world is absolutely fantastic.

“She is a valued member of the team in our Salisbury office and we have high hopes for her future with PKF Francis Clark. We are delighted for her – there is nothing better in this job than seeing a young person start to fly.”

Kalina was contacted by Shaun Robertson, Director of Education and Qualifications at the ICAEW, with news about achieving the highest mark worldwide and winning the prize.

The Little Prize was established in honour of Leo T Little, Editor of Accountancy for more than 20 years.

Founded in 1919, PKF Francis Clark has 57 partners and a team of more than 700 employees in offices across Cornwall, Devon, Dorset, Somerset and Wiltshire, recently opening their eighth office in Bristol.