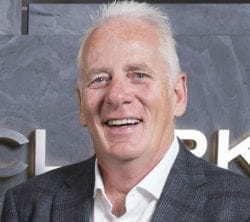 Les began his career with PKF Francis Clark in Torquay in 1981, becoming partner in 1983.He became the firm’s managing partner in 1999 and oversaw the firm’s growth to become the leading firm of Chartered Accountants and business advisers in the South West, before it joined the PKF International network in 2016. Celebrating its Centenary year the firm now has seven offices across the region and a turnover of £45million.

The Financial Power List 2019 ranks the 50 individuals who will make the biggest difference in the accountancy industry over the next 12 months.  Individuals considered for the list span government, practice and business. Their status or role does not guarantee their position in the ranking, but they have been chosen because they will have an impact on the changes they are predicted to spearhead, whether that be in government policy, tax changes, regulation, firm growth, or industry diversity.

Les Burnett said: “It’s great to have the recognition for the PKF family in the UK and Ireland, these are indeed exciting times for us.  We’re investing heavily in our operations and people, we’re introducing additional service lines where we see opportunities to help clients, and we’re winning more work from current and new clients.”

Andrew Richards Managing Partner at PKF Francis Clark said: “Recognition of this kind is great news. Although we’re independent firms, we’re working together in a joined-up way, which enables us to provide clients with a highly sophisticated service.  That opens up considerable opportunities for us to continue to grow and improve the excellent client services and advice we offer.”