Team members across PKF Francis Clark clocked up a combined total of nearly 7,000 miles during a month-long charity challenge inspired by Eddie Izzard’s Run for Hope.

The comedian ran 31 marathons on a treadmill in 31 days, raising funds for a variety of international charities helping disadvantaged and vulnerable people as part of her Make Humanity Great Again campaign. 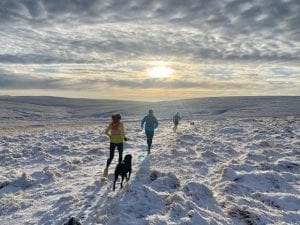 A hundred staff across our offices in Truro, Plymouth, Exeter, Torquay, Taunton, Bristol, Poole and Salisbury showed their support by pledging to run or walk at least one marathon over the course of the month. Between them they clocked up 6,902 miles and raised £1,000 for good causes.

Their efforts attracted the attention of Eddie Izzard’s team, leading to Jason Mitchell, partner at our Truro office, appearing as a guest during one of her livestreamed marathons. 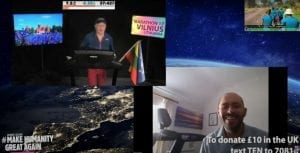 “We set up a Crowdfunder page for our project and the team at Crowdfunder kindly arranged for me to speak to Eddie during her 17th marathon,” said Jason. “This was a bit daunting, especially as other guests on the livestreams included Stephen Fry, Joe Wicks and Kelly Holmes, but it was great fun chatting to Eddie about everything from ultra-running to accountancy exams.”

As a keen runner himself, Jason completed 13 marathons on his treadmill at home during the month, joining Eddie and supporters from around the world to run together via the Zwift virtual training app. 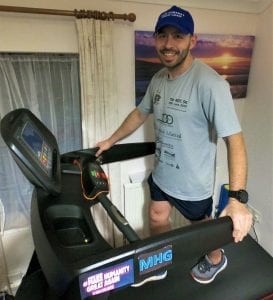 Donations to the Crowdfunder page totalled £550, not including Gift Aid, with the firm’s partners bringing the fundraising total up to £1,000. The money will go to Eddie Izzard’s chosen charities, which include Fareshare, Walking With the Wounded, Care International, United to Combat Neglected Tropical Diseases and Covenant House New York City.

Duncan Leslie, partner who heads up health and wellbeing initiatives at PKF Francis Clark, said: “Tax return season is always an extremely busy time for accountants, so Eddie Izzard’s Run for Hope challenge provided some well-timed encouragement for many of us to make the most of our all-important daily exercise during the current lockdown. 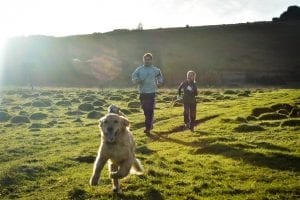 “Jason led the way, clocking up 415 miles during the month, but credit goes to everyone who took part and who donated to our fundraising effort. I was especially pleased to hear that the challenge motivated some of our partners and staff to make exercise a part of their routine, with some families getting involved too.”

FEATURING: Duncan Leslie
Duncan is an audit partner based in our Plymouth and Truro offices and is focused mainly on larger businesses. He previously spent 20 years at… read more
FEATURING: Jason Mitchell
Jason is a partner within our legal services team. Jason has been working in the sector for the last 17 years, having initially trained as… read more
FEATURING: Richard Wadman
Richard qualified as a Chartered Accountant with KPMG in 1993. Since 2006 he has worked in Corporate Finance, firstly with the predecessor firm in Truro… read more