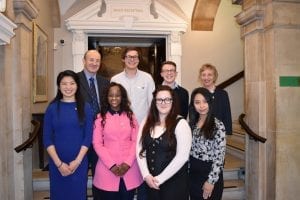 This followed her success in a competition staged by her professional industry body, the Institute of Chartered Accountants in England and Wales (ICAEW), who she represented at the summit.

Jackie, 28, impressed the judges with her five-minute video entry about education, the future of learning, leadership and the ability to inspire and motivate others.

She secured one of only 2,000 places worldwide at the annual summit, the biggest gathering of young people after the Olympics, which has the aim of bringing the future leaders of the world together to make lasting connections across the world.

Young leaders are selected to attend the summit via a variety of competitive selection processes, based on proven leadership ability and impact, with more than 50,000 applications being received this year.

Jackie said: “ I feel so overwhelmed that I won the competition to be part of the Chartered Accounts Worldwide delegation. I had some lovely praise from the ICAEW president on my entry and it has given me a huge confidence boost in my ability to be a leader.

“Despite learning about the most harrowing stories and questioning how things have got so bad in the world, I do feel optimistic about the future. If we want to create positive change in the world, we all need to work together and I think that is the key.

“It was such a privilege to attend the summit and it has definitely empowered me to use my own experiences to make things better for other people. I am now a proud OYW Ambassador and hope to make a difference in the world myself”

In 2017 Jackie was named as one of Cornwall’s Top 30 Under 30 rising stars. She also sat on the ICAEW Student Council for two years and was student society chair and subsequently president.

Founded in 1919, PKF Francis Clark has eight offices across the region, 57 partners and a team of more than 700 employees in offices across Cornwall, Devon, Dorset, Somerset and Wiltshire, recently opening their eighth office in Bristol.

One Young World is a UK-based not-for-profit organisation that gathers young leaders from around the world to develop solutions to the globe’s most pressing issues. It was founded by David Jones and Kate Robertson and numbers Meghan Markle and Justin Trudeau among its supporters.