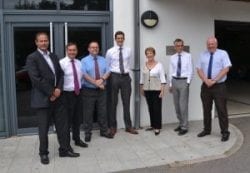 Tom Roach a partner at the Truro office of PKF Francis Clark interest was piqued when he heard that his cousin in Albuquerque New Mexico had a new Partner, with Cornish roots. Digging deeper Tom discovered that the cousin’s Grandfather was none other than John Lodge one of the founding partners of PKF Francis Clark, then called Lodge and Winter.

Mary Utton the daughter of John Lodge recently came back to Cornwall to rediscover her family’s Cornish roots and as part of that pilgrimage, Tom and the other Truro partners were delighted to host her in a tour of the offices.

Mary brought with her a short history of Winter Rule (formerly Lodge and Winter) It begins, “In 1926, a young man came down to Truro to manage the branch office of the internationally known, Deloitte, Plender and Griffiths. He was John Weighhill Lodge, who had served with distinction in the Great War, as a Lieutenant in the Monmouthshire Regiment, being decorated with the Military Cross….”

Tom went on to say:

“It really was a case of six degrees of separation, it was wonderful to meet Mary and be able to show her around our offices. She also brought with her a fascinating history of the firm and it is really fantastic to be able to read about our background and different characters that made is who we are today.”

“Little did John Lodge know all those years ago that the firm would grow to be the largest in Cornwall and the South West. We are hugely proud of our Cornish roots and I’m sure that if John were here today he would be very proud of the firm he helped to found.”

FEATURING: Tom Roach
Tom is a partner in the Truro office of PKF Francis Clark with expertise in the tourism and leisure industries. Tom’s leisure sector clients are… read more

As INEOS TEAM UK embark on the latest stage of their quest to become the first British crew to win the America’s Cup, we're supporting them…