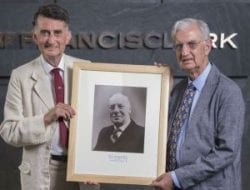 A chance remark at the dentist led two brothers to trace the roots of their Grandfather’s firm, almost 100 years after it was founded in Newton Abbot, Devon.

Chartered Accountants and Business Advisors PKF Francis Clark is named after its founder Francis S Clark. Frank as he was known, was born at the family home in South Petherton Somerset in 1886. After leaving school Frank initially worked in a local solicitor’s office, later swapping professions becoming a certified accountant.

After practicing abroad and meeting his wife Alice in South Africa, Frank returned to the West Country buying a house in Keyberry Park, Newton Abbot and in 1919 establishing the firm of Francis S Clark and Co, one of the first accountancy practices in the town.

Next year the firm which retains its founder’s name, celebrates its Centenary. The award- winning firm is now the leading Chartered Accountant and Business Advisory firm in the South West. With an annual revenue of £45.2 million, a team of more than 700 people and 54 partners, it has offices across Cornwall, Devon, Dorset, Somerset and Wiltshire.

In 2016 it joined PKF, the international network of independently owned accountancy practices which has a global presence in 150 countries, PKF UKI is ranked 11th in the Accountancy Age 2018 survey of top UK accountancy firms.

Andrew Richards said: “It was fantastic to meet Mark and Andrew, and to learn from them first hand much more about their grandfather and our founder. Although the firm is very different to the one launched nearly 100 years ago, a lot of the original ethos of the firm has been retained.

“Now as then our history and roots are in the South West, the commitment to the communities where we work and our ambition to provide the highest possible levels of client focused service have helped make us the firm we are today. We are greatly looking forward to our Centenary year and the opportunity that it brings to not only reflect on the past but to draw on that experience and plan an even more bold and exciting future.”

Andrew Rutherford went on to say: “During an everyday conversation, a chance comment about a family member working for a firm of West Country accountants, led my brother and I to realise that not only was our Grandfather’s firm still in existence, but continued to carry his name.

“I wonder what our grandfather would have made of the present firm. He could never have foreseen how, from its small beginning, it would grow and develop. He would, I think, have been very impressed, as indeed we are, at the care that has been taken over the past years to ensure that the original ethos has remained.

“We could not have had a better day and we are very much looking forward to the Centenary celebrations next year. What a chance remark at the dentist can lead to! ”