To mark International Women’s Day 2021, we sat down with Sinead Kelly-Barber, Director at Kelly Bros, a road marking and solar sign company based in Bristol whose mission is “Making Roads Safer” in the UK and Ireland, to find out about her career in the industry so far.

Kelly Bros was originally set up by my dad and my uncles before I was born. It started as a road marking company in Bristol but my uncle decided a few years ago to go back to Ireland to set up the manufacturing side of the business. Since then, the road markings side has grown a lot and expanded into hire and sale of solar variable message signs (VMS).

When my dad was running the company he used to take my brother and me out on the road and show us how things were done. My dad was quite different to much of his generation at the time, always aware of equal opportunities and was supportive of his children doing what they wanted. I always enjoyed spending time with my dad and going out on the roads, learning the trade. My dad asked both of us if we wanted to be involved in the family business, and I started going into the office and doing some admin to help out for a bit – that was 20 years ago!

As the company grew so did our family. I got married and had two boys. During that time I took a step back a bit to take care of family, including our Dad when he had a stroke.

Since then I have become more involved again including representing the company at trade shows and also out on the roads when needed, also attending Glastonbury Festival to maintain our signs. 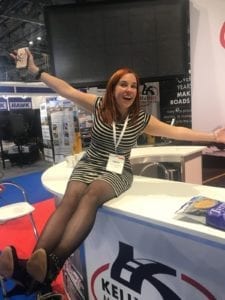 Outside of work I have lots of hobbies, I used to coach my son’s football team, which is another very male dominated arena! And I’ve done some fundraising for brain tumour research, a cause close to my heart. I took part in a white-collar boxing match for the charity to raise money for the research into brain tumours. Everyone thought it was funny at the time because I’m not the fighting type! I then had to attend a trade show the following week and had a black eye from the fight! – It was a real conversation starter. 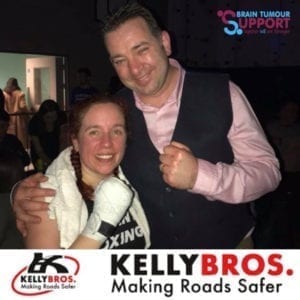 I love the diversity of what I do. I’m involved in so many areas within the business, ranging from heading up all health & safety compliance to mental health first aid to managing the accounts. I do still go out on the road when needed too – a call came in for some night shifts last year and I was more than happy to get out there and get the road markings done. The reaction from passers-by to see a woman operating the vehicle still makes me laugh! 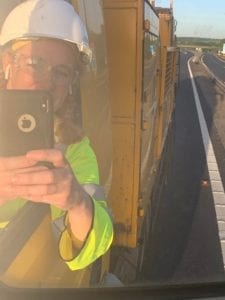 I really enjoy being out on site and I never want to be too proud to get my hands dirty and get things done.

I’d never ask a member of the team to do something I wouldn’t be happy to do myself. One day I could be in the office in a suit and the next I’m on site in my high-vis.

It can be quite funny watching people’s reactions to seeing a female out in the truck in the middle of the night doing the motorways road markings, cats eyes or anti-skid, but the job has got to be done and I’m happy to get stuck in.

What are you most proud of in your career so far?

It may sound boring but from a work perspective I’m probably most proud of our Health & safety credentials.  I put a lot of work into it and it’s hugely time consuming – but without it we wouldn’t be able to operate to the high standard of what we do. I’m also really proud of the company as a whole, how it’s grown and how we’ve managed to maintain a family culture even though we’ve got bigger.

When somebody joins Kelly Bros I say to them you’re part of the family now!

I try to make them feel part of our family by celebrating their birthdays with cakes, sweets and fruit. The fridge is kept filled up with cold drinks in summer months and everyone is offered hot chocolates over winter. They know they can call me at any time to talk anything through.

One of the nicest compliments I’ve received from an employee was when I’m out on site with them is they see me as part of the team, regardless of my gender or that I’m their boss.

What’s been the biggest challenge you’ve faced in your role in the industry?

There are day to day challenges in every business, but one challenge I feel I’ve had to overcome is at trade shows when attendees refuse to speak to me and request to speak to a male employee instead, that’s always hard. I always enjoy informing them that I am in fact the Director! Construction is still a very male dominated sector, although that is changing slowly as time goes on.

I think learning to be more confident in myself as a person in the industry has been a challenge, but something I have achieved over time. I used to feel quite disheartened by the discrimination I would occasionally face, so I’d just do my admin in the office and go home. But then I had my two boys and wanted to be a role model for them, showing them that men and women can do the same jobs and not to allow themselves to be pigeonholed based on their gender. When I had my youngest son my midwife was male and he was amazing and made the whole experience better and more comfortable for me. I never thought I’d have a male midwife but it just goes to show we need to stop stereotyping roles in lots of industries, including construction! 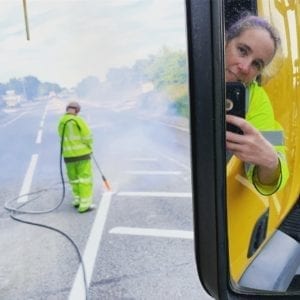 How has PKF Francis Clark supported you and your business?

Our contact at the firm is Paul Bray and he has gone above and beyond to support us as a family, from when my dad passed away to now. When my dad passed away our solicitors at the time were really unhelpful and were making an already traumatic time worse. Paul stepped in and helped us get everything in order. I’ve known Paul such a long time and he’s always been a great support for us.

One thing Dad used to always say to me is – you never know who you are talking to – He wouldn’t dismiss the person who answered the phone and always let them know what he wanted as sometimes they were more helpful anyway. Manners cost nothing.

Also – never judge. This can be hard sometimes but just because a person wears certain clothes or is a certain race or older or younger than you. Regardless they may not be who you have judged them as.

A great example of this was when I was on site and an employee was asked if I was “his Mrs?” he laughed and replied – No she is my boss!